The true story of Halloween

Halloween is celebrated on Oct 31st every year. But do you know why we celebrate Halloween and where it originated from?

Halloween dates to more than 2000 years ago and finds its origins in Ireland, in an ancient pagan Celtic festival, Samhain, the Gaelic term for “summer’s end”. This festival marked the end of the harvest season and the beginning of winter. It was believed that this was the period when the world of the living and the dead were closely aligned.

Years later, the Roman Empire combined many Celtic traditions, including Samhain with their own. The Romans celebrated “All Hallows’ Day” on November 1st (which later became known as All Saints Day under the Catholic Church). October 31st then became known as “All Hallow’s Eve’, which was later shortened to Halloween. 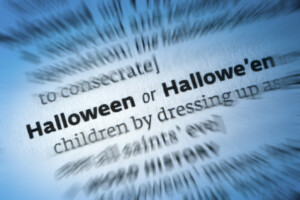 Many Halloween traditions date back to the Samhain festival:

Children go from door to door asking for sweets with the exclamation “trick or treat”. The “treat” today is usually some form of sweets. The “trick” refers to an idle threat to perform mischief on the homeowner or their property if no treat is given.

Faces are carved out in potatoes, turnips or pumpkins and illuminated by a candle to frighten away evil spirits. The Irish brought this tradition to the United States, home of the pumpkin, and the tradition evolved to carving pumpkins.

This is a game played at Halloween where a basin is filled with water and several apples are placed in the basin. Apples were typically used to reference Samhain, the end of the harvest season.

Bonfires are lit to ward off evil spirits. The idea was that fire would purify the air and ward off bad fortune for the coming year.

People dress up in scary disguises to keep evil spirits away. Traditionally, Celts wore disguises in case evil spirits, not scared off by the fire, happened to be wandering the earth. The Celts believed that because of their disguises, they would also be considered as spirits and would be let go free. 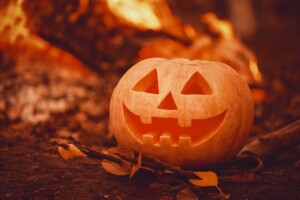